What To Do With Your Great Idea

June 30, 2020
Most organizations will put out the claim they want your feedback and your ideas. If you have a way to make it better they want to hear it.
The culture dictates what the picture looks like in reality, how people truly share those ideas and feedback.
This is true in all levels too. Most think the problems with idea sharing are those in the trenches can't get through to the coach, manager, teacher or parent. But it is just as hard for those same individuals to get ideas through to a player, employee, student or child.
The biggest problem with ideas are they go against the status quo. People don't want to change. It is comfortable. They new is unknown, risky. Many thought there was no way a horse would be replaced by a car when they were first invented, look where we are now?
Ideas are hard. If you have an idea, and you believe in it, sharing it one time isn't enough. If it makes sense, you have to talk about it multiple times. You have to share it with people that will tell you what is wrong with it so you can make it better. Just because the crowd doesn't cheer the first time you talk about your idea doesn't mean it isn't great. It just means the first step is done and you now have to figure out what you are going to do next. 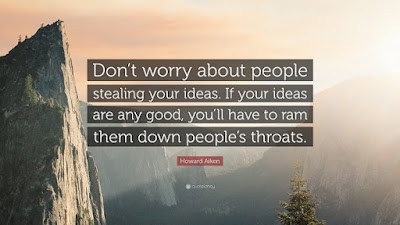