Before The Last Buzzer Sounds - We Can Still Win

June 04, 2020
I write and think about leadership a lot here. It is because I believe we are all leaders. We might not be in high profile management type positions, but we all have a sphere of influence which gives us the opportunity to be a leader. We are in great need of leadership because this year has been crazy, and we aren't even half way through it. That is a huge opportunity for us to change the narrative on the rest of 2020. But we need leadership. 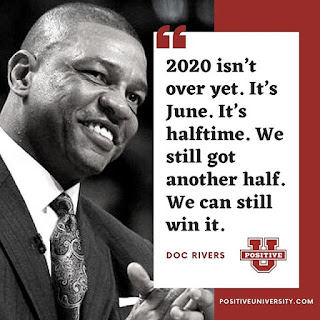 I saw this quote by Doc Rivers and think of the times we've seen great second half comebacks, maybe you've even been a part of one. When you are down at halftime the coach needs to lead, but you also need the players on the team to step up. Everyone can't just throw up their hands, assume the game is lost so try to not to get hurt or have them laughing at you. There are plenty of teams that have that attitude, and we would label their coaches as bad. The great coaches, the great leaders, inspire us to give everything we can to turn the tides in the second half. Win the first 5 minute coming out of the half, make them call a quick time out as they feel the momentum shifting. Chip away at the lead, get it close enough that you give yourself a shot at the win when the last buzzer sounds.
It may feel like 2020 is a lost cause, but we have an opportunity for one of the greatest second half comebacks the world has ever seen. You've heard all of the talk about how the events unfolding are going to be talked about in history books for generations. We get to be a part of how the story ends.
This is where we need all of the leaders of the world to step up. That doesn't mean the people in positions of authority, authority doesn't make you a leader. We've seen too many examples where this is true unfortunately. You can be the leader we need, we need you united with others to make our comeback. Right before the Normandy invasion during World War II soldiers were reminded that the Nazi goal was to divide and conquer, but our answer was "In Union there is Strength". Today we are a nation divided, a team at the half where everyone is playing for themselves. We are playing for the name on the back of our jerseys rather than the name on the front.
The last buzzer hasn't sounded yet, if we want to win we need to be more united than we have ever been.
Leadership Obstacles Warrior