Showing posts from November, 2018
Show all

The Casual Attitude That Slowly Kills 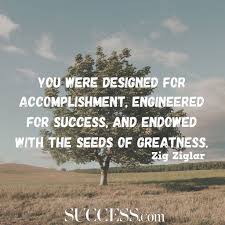 Read a great quote recently by @jonacuff , "A casual system fails from the beginning!" It really struck a nerve with me as I realized how casual we are, especially living in Minnesota where we are teaming with Minnesota Nice. We are friendly, cordial, submissive and passive. I see casual every day when we talk about something that is broken, something that needs improving or even a complete overhaul. We get casual and talk about how much better it is than before. In sports 2 wins is better than 1, but if that is all you accomplish in a season your team isn't very good. I don't want better, I want great. Better means you are going in the right direction, but being on the right road doesn't mean you've reached your destination already. The first thing that takes us away from greatness is how unified we are as a team. If personal agendas rule and people have a different picture of what the vision of your organization is you will not achieve greatness. You nee
Post a Comment
Read more

Where Are We Playing Not To Lose? 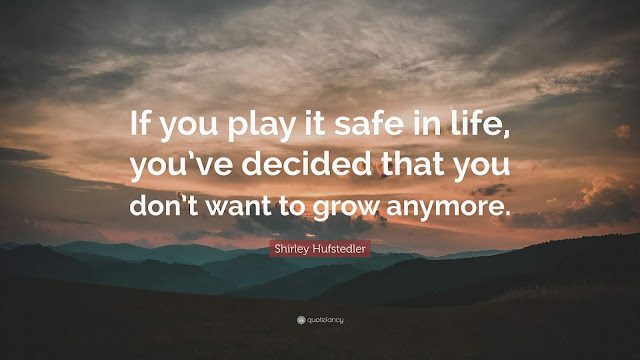 In sports there is a clear objective, to win the game. At times you see it where a good team will lose a game they shouldn't because they are off, they aren't playing the way they normally do. They aren't playing to win the game, they are playing not to lose. Their style changes to a prevent defense, slow down the game, control things and hope that time runs out on their opponent making a comeback. A team might get some wins that way, but you are never going to win a championship playing not to lose, you need to play to win. Many of us play not to lose every day. In school we look at what we need to do to pass, not what it takes to get an A. At work we try to not lose our jobs. We do what is required or asked of us but don't go out of our way to find the things that can deliver above and beyond. Our companies look to maintain market share, playing it safe rather than looking at ways to take risks to gain ground on our competition. We guard ourselves in our relationsh
Post a Comment
Read more

Can We Be Thankful For The Things We Don't Like? 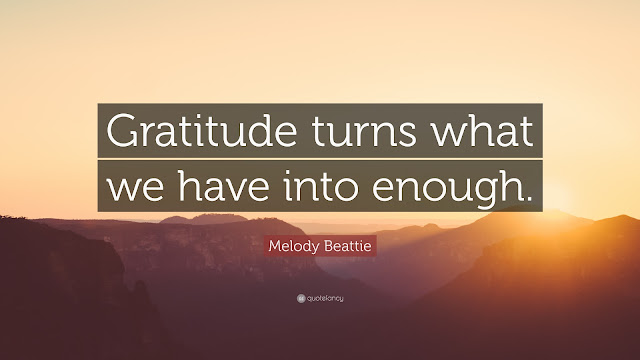 Today is Thanksgiving, have you thought about what you are thankful for? Every other day of the year we probably spend too much time thinking about the things that make us mad and frustrate us, but today should be different. How we approach today sets a foundation for every other day of the year. We have the power to change most of the things that we don't like by changing our own language we speak to ourselves. It would be easy to complain about the fact that a part broke on my car and had to be replaced. It took time to get it repaired, deal with a loaner and of course it cost money. However I am thankful that it didn't break down on the side of the road, I could deal with it on a Saturday when I had some free time, I had money saved up just in case of such an auto repair need and we haven't had a car payment in over five years because they have been very reliable cars that don't need expensive repairs. Today as you spend time with family and friends reflecting
Post a Comment
Read more

Maybe You've Heard This Before, But It Is Worth Repeating 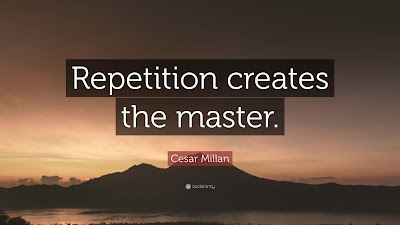 As a manager, as a parent or as a leader, it is easy to feel like we have to repeat ourselves. Having that feeling that we've talked about this before and being a little disappointed that you are telling them the same thing again. It really shouldn't surprise us though, how many times do we ourselves have to hear something before it sinks in? If you are working on changing a culture or building a skill in your team expect to repeat yourself. Different people learn differently so some might get it during the team meeting you share with the group, some might get it during a one-on-one conversation and some might need to read the handout for themselves. Individuals have other things going on in their life too, struggles with a sick child, an ailing parent or some other dynamic that takes focus off of their work. Maybe everything doesn't click for them until the outside distractions subside and they hear it from you again two months from now. It is interesting how we talk a
Post a Comment
Read more

Knowledge Is Power: What Do We Do With The Power We Have? 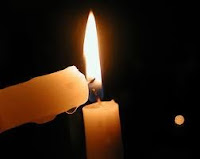 The saying, "Knowledge Is Power" is well known and frequently misapplied in the world. Power means strength and just like physical strength it can be used for good or bad purposes. Being physically stronger helps you to be fit and healthy, it prevents injuries and illness. But if you use your physical strength to bully someone weaker than you everyone sees that as a bad thing. Knowledge is no different. We think that we have to have all of the information and if we know more than others that makes us more powerful, safe in our jobs or more important than our co-workers. But if we use our knowledge to control others, control conversations and use the knowledge we have against others we are just a different kind of bully. I like to think about knowledge as flame. When we take the fire on our candle to light another candle we don't extinguish our flame, it burns just as bright as it did before. If every person has a candle in a room one person starting it can light up
Post a Comment
Read more

The Importance Of Investing 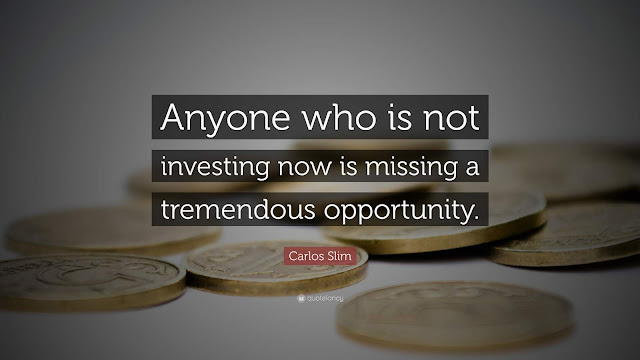 In IT there is a concept called Technical Debt. The premise is pretty simple, every application you buy, every system you create incurs a certain amount of dept. Your debt level goes up as you add complexity, add additional systems or don't actively work on paying down your technical debt. It works kind of like your credit card bill. If you only pay the minimum it will take you years to pay it off, even if you don't buy another thing. Financially for a business, there is often a certain level of debt that is necessary if not valuable. Few businesses can get started without a loan or venture capital investment. If a business wants to expand it could take an investment. Whether it is technology, financially, educationally or just about any other area we need to keep investing in the future. I've seen it all to often with technology where a company invests sometimes millions of dollars installing a system and building it to suit their needs. Once it is done they want to sc
Post a Comment
Read more

How Do You React To A Fumble? 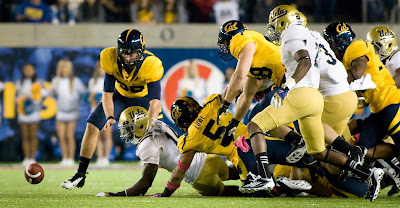 It is football season, so you probably get a greater amount of football analogies than you would expect from me right now. One of my favorites is the idea of the fumble. If you've watched any football and seen the ball pop out it, you know how it becomes a mad scramble to recover it. Any player remotely in the vicinity dives head first into the scrum, scrapping and clawing their way to recover the ball. Never have you seen a fumble where the other 10 members of a team stand around complaining about the running back that lost it. Talking about how much the whole group of running backs needs to stop dropping the ball. Getting mad that they haven't recovered their fumble after they lost it. The running back has responsibility to get better and stop fumbling. But if they want to win every other member of the team needs to be sold out on helping recover any and every fumble that happens. Yet in business, we point the finger at other departments and complain at the water cooler
Post a Comment
Read more

When Life Knocks You Down 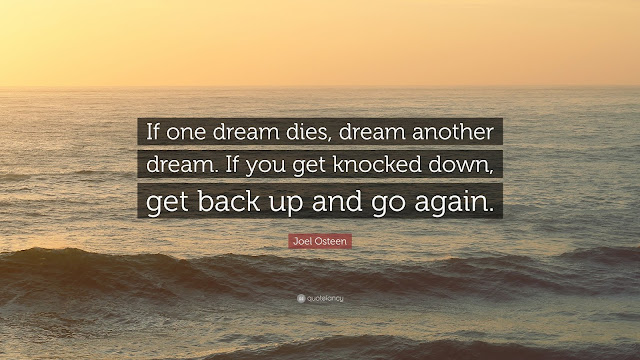 You know those times when you feel like things are going your way, you tell yourself you are in your "zone", thinking you can take on the world? What usually happens... Monday morning and I'm ready to take on the week and then ... pic.twitter.com/sNoRfbWB3p — Jason Romano (@JasonRomano) October 29, 2018 How many times is that how we feel? Feeling like you are ready to take on life only to have life knock you on your butt? You don't get to see what happens after that, but I'm willing to bet that cornerback got back up again and got right back in there against his opponent. I'm sure he learned something and was better prepared the next time, but he didn't quit. Cut the scenes a different way, and that is how we need to attack life. So you got knocked down, so what? Stand up, get back in there and say, "Bring it on! Lets go!"
Post a Comment
Read more

Don't Stop Just Because You Aren't The Greatest 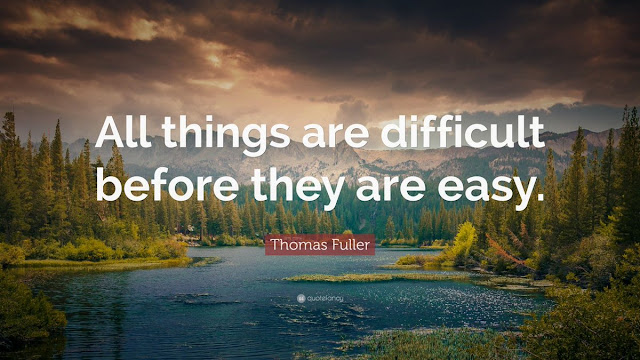 We are all ignorant, it is just that we are ignorant about different things. There are times where topics like math, music, programming, construction, engine repair, or flying a plane come very easily to some people where others feel like a baby learning to walk. Just because something comes harder for you than someone else doesn't mean you can't be successful at it.  We can easily recognize the success of LeBron James and Michael Jordan as NBA players. But what about someone like David Wingate that played 15 years in the NBA? I'm guessing very few people know the name but does that matter? Not many people can say they've played in the NBA at all, let alone 15 years. Just because they aren't LeBron James does that mean they aren't successful? There is always someone smarter, stronger, faster, more talented or just plain better than you. That does not mean you are dumb, weak, slow, inept or just plain worthless. You are capable of great things. You can lea
Post a Comment
Read more
More posts