Are You Able To Talk To A Stranger?

March 10, 2020
Work has been a little crazy for me in 2020 which has cut into my reading time in the evenings of late. I was fortunate however to finish reading Malcolm Gladwell's latest book, Talking to Strangers: What We Should Know about the People We Don't Know. I've always been a big fan of Gladwell, his ability to tell stories and make you think is phenomenal. He is a story teller, but rather than writing fiction he takes real stories and can weave them together to present a concept you never realized was something you should think about.

This book starts and ends telling the story of the arrest and death of Sandra Bland in 2015, which happened amidst the contentious race relations with police when it was at its peak around this time. Gladwell takes you through court transcripts and recordings of the interaction, to present a different way of looking at the situation. Not trying to prove who was right or wrong, just presenting all of the information that led to the unfortunate events.

In addition he tells stories about Cuban spies embedded in the CIA and the man who tried to warn others about the Bernie Madoff Ponzi scheme for years before he was finally caught. He then weaves these completely unrelated stories together and makes you think about how often we judge others incorrectly.

We try to make generalizations to make it easier for us to understand people and try to figure out the best way to deal with them. We think the techniques and tools we have to help us make sense of each other actually help us, when they often fail us. This leads to misunderstanding, which often leads to conflict. People are complex, no two people are the same and no two people react the same in identical situations. We need to get better at talking to strangers because throughout our lives we will cross paths with far more people we don't know than we do. 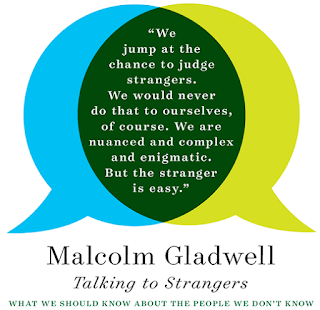