The Mayo Brothers, Healthcare 100 Years Ago, And Lessons For Today

August 01, 2019
I recently watched the Ken Burns documentary about The Mayo Clinic (also available on Netflix at the time of writing). Ken Burns does a great job telling the story of the Mayo brothers following in their fathers footsteps and growing The Mayo Clinic into the medical enterprise it is today. There were some interesting principles that apply to any area for people to learn from. While they were both world renowned surgeons they were focused on providing the best care for the patients that came to them. They sought out the best doctors in other specialties to join them and grow their practice. They believed in a team based approach, where it isn't about having one doctor have all of the answers, but about having a team that can come together to help a patient.

After watching it I couldn't help but think about how broken our health care system is in our country. I'm not a health care expert, I'm barely a novice. I've just scratched the surface in my reading and comprehension of the system today and yet it isn't hard to see when you consider the costs of insurance and health care today. Many families need to have two jobs simply for the need to cover the costs of health insurance.

As I dug a little deeper I found a couple of interesting articles that really made me think:


The Mayo brothers became as successful as they did because they found a different way to practice medicine compared to the traditionally competitive and individualistic way it was in the late 1800's. They knew they needed to make a profit but it wasn't to line their own pockets, it was about reinvesting to advance the science, and they also gave away millions and always put the patient first. Today our capitalist society has turned healthcare into a business just like any other, and unfortunately the patients are the ones that suffer. We can learn something about how to fix it based on some of the Mayo quotes that are 100 years old:


We don't have individual doctors competing today, now we have corporations competing to see who's stock is performing the best and CEO's comparing their total compensation package. We need to find a way, in healthcare and all businesses, to do better. To give you an example, I have a friend that recently had to have an MRI done. The quote they got from their hospital was around $3,000. They ended up calling around to get a fully out-of-pocket cost to compare and another provider said they would charge $350. Now the numbers could be a bit off if I misheard but there are countless stories like this from different people. And yes, the other provider had state of the art equipment, they might have even had better systems. The fact is the system is broken. The patient is healthcare and they are very sick, injured, maybe even dying. The answers are out there and I believe there are new organizations forming and growing, developing new techniques and practices, much like the Mayo brothers did over 100 years ago changing the face of medicine. I believe 100 years from now there will be a new story being told of the people changing the face of medicine when it was at its low point.

This isn't meant to just be a rant about healthcare being broken. It is a lesson for all of us, sometimes problems can start out innocently but over time they grow into something terrible. Ignoring the problem doesn't make it go away. We need to stop complaining about the issues and act. Stop expecting the government to step in and fix it. Stop hoping someone else will do it. You are a part of the solution. You might not fix healthcare, but there are lots of problems out there to be fixed. 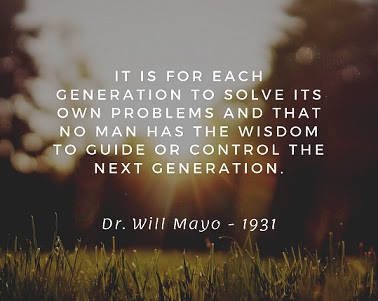