Stuck On The Tarmac, Who Should I Complain To?

August 20, 2019
Had to make a business trip recently and it didn't exactly go well. I was flying from Minneapolis to Chicago, which is one of the shortest flights ever so how could it be bad? By the time you've reached cruising altitude they have to start the decent. The problem was there was some weather in Chicago the morning of my trip that caused everything to back up. Plane was delayed arriving into Minneapolis, so it was late taking off, then it got worse. We landed in Chicago and things were so backed up that we sat on the tarmac for an hour and forty minutes waiting for a gate to become available.

I can't really complain though, I've heard far worse stories of people being stuck on a plane in the past. Even on my flight there were people trying to get to a connecting flight but there were none for at least 2 days, I can't imagine what that would be like.

It is so easy when in a that situation to complain, talk to anyone who will listen about how screwed up the airport is, the airline is, the pilots are, the traffic controllers, and on and on. We tend to complain about things we have no control over to people who can't do anything about it. There are a lot of things we do have control over, why don't you work on making those things better? What are the things people complain about you or your organization? Make those better. Find something more productive to do with your time. Use your time that you are stuck on the tarmac to finish watching the end of the movie you were watching, catching up on your reading and writing the concept for your next blog post. 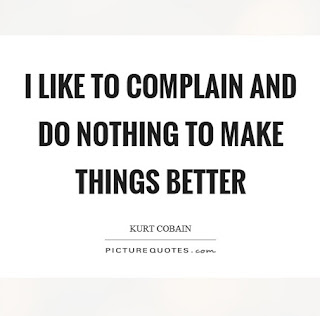