What A Little Kindness Can Do

October 29, 2019
You can never go wrong in life by being kind and generous. You may have seen this story as it has gone viral, about a girl who gave two hockey pucks to a couple of boys next to her during warm-ups, one of which desperately wanted to get a puck. At the end of the video you could see the admiration the young boy had as he told her thank you.

A simple act of kindness, a story which could have ended there. However, with the power of the Internet, it was not the end of the story. The Minnesota Wild organization was able to track down 11-year-old Emily and they repaid her kindness by inviting her back to the next game, allowing her to meet some of the team and they presented her with a signed jersey and signed pucks from every member of the team.

We don't act kind to others because we expect or even hope to get something in return. Emily didn't do it because she expected to become a viral sensation and be presented with some amazing gifts from her favorite team. She did it because it was the right thing to do in the moment.

We love stories like this, we send to our friends and give the post a like on social media. But how often in life do we actually generously act kind and expect nothing in return? We all like the story, but for the story to really take off, for the world to see the true nature of the human spirit, we need more viral stories. To get more viral stories we need more acts of kindness. The more acts of kindness in the world, the more chance there is of others seeing it. The more people who see it the higher the odds of someone repeating it. Then the cycle continues.

You can never go wrong in life by being kind and generous. Do it today, expecting nothing in return. What you will get is a world that is just a little bit better... because of you. 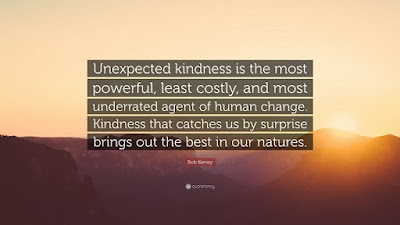