Do We Recognize The Propaganda We Are Bombarded With?

October 08, 2019
My latest read is a book called Propaganda by Edward Bernays. I came across it from some online discussions around how we as a society are manipulated by the information and messages we choose to take in. It is a short book, very academic and not an easy read, but it is a fascinating look at how businesses and the government influence the public. The author examines how public opinion is shaped and controlled in politics, business, art, education and science. Listen to the opening line and think about the information we are exposed to:


The conscious and intelligent manipulation of the organized habits and opinions of the masses is an important element in democratic society. We are governed, our minds molded, our tastes formed, our ideas suggested, largely by men we have never heard of.

Think about the manipulation of the news by the media to attract clicks and viewers. Think of the messages put out by politicians that aim to separate us and leave no room for compromise. Think about how businesses that collect and track our information to manipulate our buying behavior with the sole purpose of making themselves more money. We as a society need to be aware of how public opinion is formed. This book absolutely will make you think differently about the messages you hear.

What is really crazy though, this book was written in 1928. It is almost 100 years old and the messages are as relevant to us today as they were back then. The point hitting home the most for me reading this is how much as a society we are more intelligent and have access to more information than at any other point in history, yet we are willingly manipulated because we don’t know or don’t want to know the truth.

So what can you do? First, understand that most messages are propaganda and learn to discern what the real motivation is behind an organizations actions. Second, whatever your job is, work really hard to make sure your messages aren’t propaganda. We as individuals must strive to ensure the following written in 1928 might be made more relevant, not less so with every passing day.


The public is not an amorphous mass which can be molded at will or dictated to. Both business and the public have their own personalities which must somehow be brought into friendly agreement. Conflict and suspicion are injurious to both. … It must explain itself, its aims, its objectives, to the public in terms which the public can understand and is willing to accept. 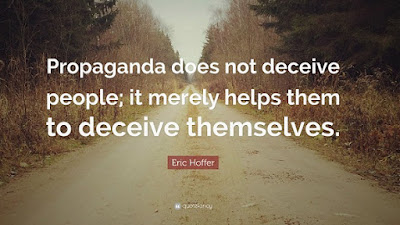