Fyre Festival And The Frog In The Boiling Water

January 29, 2019
Just watched the documentary on the Fyre Festival, a luxury music festival that never was. It was a fascinating look at how momentum and the wrong kind of leadership can lead people into a complete disaster.

After watching I was reminded of the saying about how you can't kill a frog by dropping him into hot water, he reacts too quickly and he immediately jumps out, no harm done. But if you put a frog in cold water and gradually warm it up until it is boiling hot, you have a cooked frog without him even realizing it is happening.

There were lots of people involved with putting on the Fyre Festival, and almost all of them didn't do anything criminally wrong. The thing that is interesting was the number of people that knew something was off but couldn't seem to do anything to stop it. 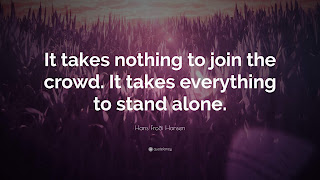 I believe that many of us face situations like this in our lives, probably not as big of a disaster as Fyre Festival, but it is still a lesson for us. When my instincts tell me something is wrong do I have the courage to stand against the crowd or against the leader saying we need to push through those challenges? It is easy to watch a documentary and see all of the signs looking back, but in the moment when you are doing what is expected of your job, just trying to get paid, it is a much finer line than you would think. Will you be able to recognize it in the moment and walk away?
Awareness Fear Knowledge