A House Divided Against Itself Cannot Stand

The words of Abraham Lincoln have been ringing in my ears for some time now, "A house divided against itself cannot stand."

The words spoken were brought about because of the divide in our country over the topic of slavery. Our country was divided from the colonial establishments in North America where the slaves were first brought in 1619. The practice grew and after the Revolutionary War, were we fought for our freedom, stipulations were drawn around what the term "all men" in the Declaration of Independence really meant. The Three-fifths Compromise was added to the Constitution. Some of the the most revered men in our countries history were flawed humans, like we all are, who made wrong decisions though they felt they were right.

Our country grew but the division was still there. People turned a blind eye, or fought to make things right, or compromised while justifying their actions in their minds but not in their hearts. Then in 1858 Abraham Lincoln spoke these words.

A house divided against itself, cannot stand.

I believe this government cannot endure permanently half slave and half free.

It will become all one thing or all the other.

Either the opponents of slavery will arrest the further spread of it, and place it where the public mind shall rest in the belief that it is in the course of ultimate extinction; or its advocates will push it forward, till it shall become lawful in all the States, old as well as new — North as well as South

These words were spoken by Lincoln over 160 years ago, and it was true, the house that was divided didn't stand. And though the Civil War was the climax of the story, it was by no means the end. The division remained through the Reconstruction era, Jim Crow laws, the Civil Rights Movement, and still persists to today. The division today has even taken on new forms as exist between Democrat and Republican, rich and poor, and the uneducated and educated.

To rid ourselves of the division that exists in the world I look to the example of the story of Jesus. He walked the earth and cared about everyone he came in contact with. Some of the most vilified people of that time - prostitutes, tax collectors, Samarians - were the people that Jesus showed compassion towards. We all need to show compassion to everyone that we come in contact with.

Our country was built with a government system that could grow and change. While it was founded under the concept that "all men" referred to only adult white males as the ones that got to vote, the laws have changed so that every citizen of this country has the right to vote. While there are many who think this shouldn't be the case, the law still stands. As the law has changed, our view of the words "all men are created equal" should be easily understood to include all people. Everyone is created equal and have the rights to life, liberty and the pursuit of happiness. If you try to justify who that is actually supposed to include or not, that is where the division starts in an individuals mind and heart. When individuals are divided a nation becomes divided. A nation divided against itself, cannot stand. 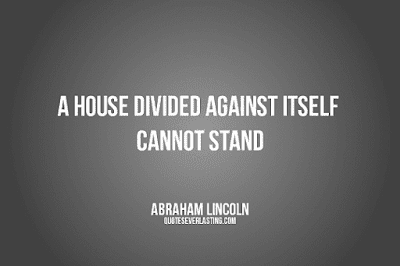