The Lost Art Of Thinking Before Speaking

July 28, 2020
I wonder what it was really like during World War II in our country. Reading the history I know that most Americans opposed entry into the war until the attack on Pearl Harbor. Even after we were drawn into the war there were groups of people that opposed the war thinking Nazism was preferable to Communism as well as other more racist stances. Amidst all of that the overwhelming stories handed down were about the Greatest Generation and how everyone did their part, no matter how small, to support the war effort. Everyone knew that sacrifices had to be made, even the sacrifice of so many lives.
I think about that generation, trying to understand how in 80 years it has become hard to find a similar spirit of unity. We are a divided country and I see no desire on either side to try to reconcile. The concept of evaluating the words you say before you say them has been lost with the anonymity of social media. Asking ourselves, "Is it helpful? Is it kind?" before speaking to someone else is a rare event, even with the people that we are closest to.
We are all entitled to different opinions, but we need to ask ourselves if the stance we hold makes things better for everyone. Wars are fought over differences of ideals, look at the entire history of our country and every war that we have fought in. Peace is found by finding common ground and each side listening and conceding something to the other side. We are so busy fighting and holding firm to our opinions we don't realize the view people from around the world have of us right now. There are people from various countries that I work and interact with, and hearing the opinions the world has of America is embarrassing. For starters, they can't understand how a country as wealthy and educated as we are can't simply come together and all wear a mask.
It starts with the words we say, all of us need to think a little more before we speak. Words create beliefs and beliefs create a culture. Do we want a country that is united or that is divided? It starts with the words we say on social media and the words we say to each other. 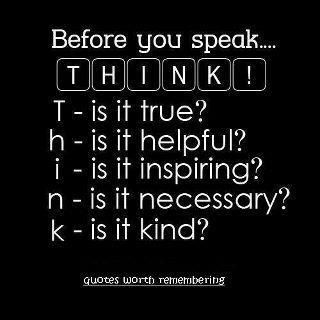