February 06, 2020
We all know, if you live in a glass house you shouldn't throw stones. This is not a good analogy for how the world actually works. Yes, we all live in brittle glass houses, as the imperfect beings we are. But it isn't as simple as not throwing stones like we are a starting pitcher for the Yankees. We are going to get stones thrown our way, some intentionally, but like a rock hitting your windshield sometimes the circumstances are just right. If you've ever been cut from a team, lost a job, or been given some critiques on things you can do better, it isn't hard to feel like big stones aimed right at you.

The fact is sometimes we need to be told things aren't good or need to be improved. It is easy to avoid having hard conversations because you don't want to throw stones. But it doesn't help the other person improve. I always tell people if they see something that I can do better, I want to know. It sucks to hear but I can't improve things unless I know about them.

We can't think of those types of conversations as stones, we need to think of them as an egg you have to toss to the other person so it doesn't break. To do a good egg toss the person throwing has to have a soft throw and the person catching has to receive it gently. You have to work together, you can't expect someone to catch it without breaking if you throw it when they aren't looking. 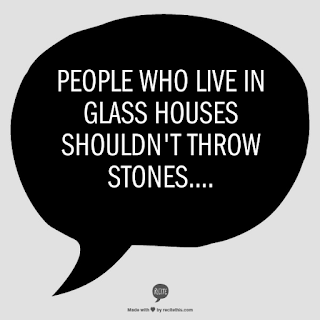