In Most Situations, How You Feel Doesn't Matter

February 25, 2020
I was listening to episode 80 of the Jocko Podcast and they were talking about being able to detach. This isn't about detaching as in pulling away and not interacting with another human being. It is about being in a heated situation and not getting caught up in the moment, keeping your cool to make rational decisions. Granted Jocko is a decorated Navy SEAL who later in his career was in charge of training new SEALs. He has been in engagements that make whatever your situation is trivial. The skill is useful to all of us even though we will likely never be in a combat situation.

One of the best examples Jocko talked about was whenever his kids are fighting, he instantly detaches and steps in. He doesn't get emotional, he doesn't yell at his kids to stop fighting or else. He calmly steps in, assess the situation, gathers the facts and details needed, and quickly makes a decision.

Haven't we all been in a situation where we loose our cool? We look back on a situation and you realize you let your emotions take control. We get lost in the moment and wish we could go back now that we've had a chance to think it over. Wishing there was a way to take a mulligan. It is those times that you say something you later regret.

Being able to detach doesn't mean that you don't care, it doesn't mean you slow down to a snails pace to gather all of the details. I can only imagine what it is like as a Navy SEAL, there are moments that you absolutely cannot go slow, but charging into a situation without all the details can get your men killed.

If you find yourself feeling angry, frustrated or annoyed by different situations, recognize it is an emotion and it is an opportunity to detach. How you feel about different situations does very little to actually bring about changes. Don't make the problem worse by letting emotions cause you to react in a way you are going to end up regretting. 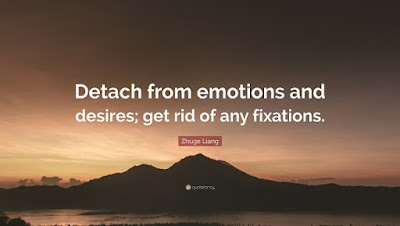