Objective: Be A Part Of A High Performing Team

July 04, 2019
I've realized that one of my goals in life is to experience being part of a high performing team. I've always been a part of a team, and almost every team has been made up of great people working together. But when I say high performing team it is another level. In high school I played basketball and baseball. I played on teams and we won some games, I would never say we were a high performing team at any time. A high performing team is one that wins or competes for championships. You watch them and there is something special about them. Everyone else gets pumped up when they have to play them because they know they are going against the best. High performing teams are identified from those outside, others recognize their greatness, it is never self proclaimed.

The final step is getting everyone believing in the one focused direction together. By everyone I mean absolutely everyone. Not the CEO and executive team, not the leadership team, not the management team, and not even the majority. You need everyone working together, willing to do whatever they need to in support of the team. They sacrifice their personal goals and agendas in favor of the teams goals whenever they need to.

If you are part of a team, no matter what your role, are you worried about your status, position and agenda? Or are you worried about what you need to do to make sure the team is successful? The team is not here to serve you, you are here to serve the team. If everyone on the team isn't thinking the same way, you will never reach that high performance standard. You could be great, but there is another level that few are able to achieve. Is your goal to be good or is it to be a champion? 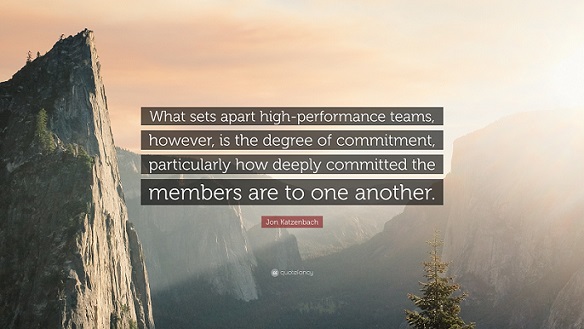