Who Is The Good Guy In The Karate Kid?

If you grew up in the 80's like I did you are familiar with The Karate Kid. I was bullied in school and it is one of those films that inspired me. I thought I could find a way to stand up to the bullies, win the heart of the girl and be the champion at the end. I, like everyone cheered for Daniel LaRusso because he was the hero and Johnny Lawrence was the villain. But was it true, or was it just the story from Daniel's point of view?

The tale of Daniel and Johnny has resurfaced recently. Their resurgence is thanks to a show called Cobra Kai whose first two seasons moved to Netflix, with a third set to air in 2021. The show is outstanding. There are some great nostalgic references to the 80's, but what makes it really great is how you see things from both Daniel and Johnny's perspective. You spend the entire show trying to figure out who the good guy is and who the bad guy is. You see both of them make mistakes, say things they want to take back and make both poor and good decisions. You see glimpses of where these two guys are a lot alike, and hope they can figure it out and become friends. Then you see the times when they are hurt by the other and retaliate seemingly destroying any chance of reconciliation.

It is what makes it great. They are both the good guy and the bad guy. Or put a better way, they are both just people living and making decisions based on what they see. Sometimes it is good, and sometimes it is bad.

One of the values I've always held onto in my life is there are very few bad people in the world. Most are just coming at things based on their perspective. Which is why it is so important to see things from someone else's point of view. If we only respond based on what we see and know, you could be making a mistake.

I highly recommend checking out Cobra Kai on Netflix. If you've never seen The Karate Kid I would recommend watching it first because without that context you will lose some of what makes the show so good. It also has some great scenes about what school looks like for many today when it comes to bullying and social media. The greatest lesson though is how to look upon others with grace and mercy because we never really understand what someone else is going through. 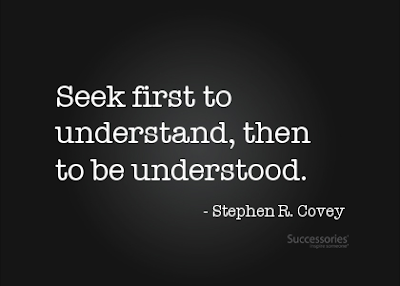