The Difference Between Fear And Respect

May 19, 2020
As we've been in this global shut down for over 2 months now you can tell people are getting restless. We continue to learn more about the disease, how it spreads and how deadly it is, yet we still have much to learn. We don't have a vaccine and won't have one for at least another year, and then the questions will arise on how much testing has been done and how safe it is. There are doubts and questions and endless opinions (oh so many opinions) of people who aren't experts pointing to articles by theoretical experts or actual experts who share their opinions based on what little data they have. Too much of the information we are being fed is meant to generate fear.

The problem that is going on right now is a divide between keeping things shut down for safety and opening things back up to get businesses moving again. The issue is both things are true. The disease is deadly, though not as deadly as once suspected. Just because it isn't as deadly doesn't mean we ignore it, you may think differently if someone you love ends up in the ICU. Just because it isn't as deadly as expected doesn't mean we ignore it and return to exactly the way things were before.

The conversation in our house this weekend was about fear and respect. In the beginning there was a lot of fear over COVID-19. Now that we know more we are trying to help our kids move from a state of fear to one of respect. There is a chance that you could contract COVID-19, there is also a chance you could get cancer, have an aneurysm, get in a car accident, stub your toe, cut your finger or get struck by lightning. We don't walk around in fear of those things.

There is a difference between fear and respect we need to be more aware of. When we have fear we need to determine how we can move from fear to respect. Once we operate out of a state of respect we are able to have civilized conversations and come up with viable solutions. Now more than ever that is exactly what we need. 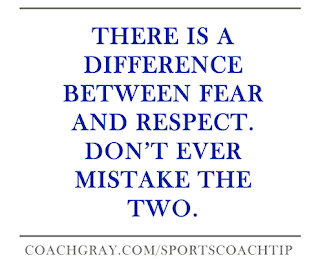