May 21, 2020
There had been a trend in youth sports I'm happy to see finally start to shift. When I was growing up if you played sports you played many sports, you didn't play just one. There wasn't specializing. Somewhere along the line that changed and if you became good at a sport it became all you did. You have your in season team, your off season traveling team, your camps and workshops. If you wanted to be great you had to have a singular focus.

Today you see more emphasis from college and professional coaches and scouts talking about multi-sport athletes. Most professional drafts have some mention of the percent of first round draft picks who played multiple sports in high school. If you are a great athlete you can still be a kid and try lots of things. You don't need to cut every other thing out of your life if you want to go pro, from the numbers, it seems like that hurts you more than it helps. Which makes sense, because how many kids probably burnt out playing one sport all year?

We get it, being a multi-sport athlete is a better route to go, but what does that have to do with polymaths? What the heck is a polymath anyway?

If you aren't familiar with the term, a polymath is a person of wide-ranging knowledge or learning. A Renaissance man or jack-of-all-trades. Leonardo da Vinci is a common example, he was an artist, inventor, scientist, astronomer and more. Benjamin Franklin is another, he spent time as a writer, politician, inventor, scientist and countless other roles. For some the term polymath means that you are an expert in every area you are interested in. I think that is a bit strong, and believe it more means you have a deep level of knowledge on many subjects. When you are interested in a subject you are driven to learn as much about it as you can. You don't specialize in one area but you work to become great at every area you are in.

Those multi-sport athletes that all got drafted in the first round are a lot like polymaths. The reason they got drafted wasn't because they focused on one sport or played multiple sports. They were driven to become great in every sport they played. That character made them who they were. It is why we see some of the most gifted athletes not make it in college or the pros. It is why we see players that weren't the most gifted athletes, the walk-ons that had to prove themselves every day, to show they belonged.

We should all strive to become polymaths. Be interested in a variety of things, because there are a ton of interesting things in the world. For each of those interests, strive to be the best that you can and learn as much as you can. 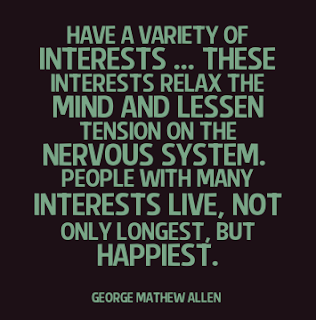