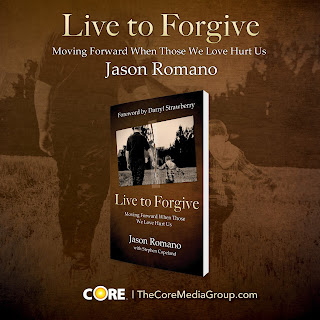 I recently had the opportunity to read the soon to be released book Live to Forgive: Moving Forward When Those We Love Hurt Us by Jason Romano. I have to admit that when I was first given the opportunity I came up with lots of reasons not to volunteer. When I realized the real reason I didn't want to read it was because I was trying to hide the unforgiveness in my heart I knew it was God's way of ensuring that I did read it. I'm willing to bet that if you stopped to think about yourself, there is at least one person that comes to mind that has hurt you and you just can't bring yourself to forgive. If you thought of a person then this book is for you.


"Everyone thinks forgiveness is a lovely idea until he has something to forgive." - C.S. Lewis

Live to Forgive is Jason's personal story about his life and ultimate forgiveness of his alcoholic father. He winds us through an emotional tale that is very easy to relate to. Yes you may not have had a relationship with an alcoholic parent, but the toll it takes on Jason is easy to draw parallels to in your own life as he takes you through his journey. He talks about how he processed and ultimately came to forgive his father and how that reconciliation continues to this day. There is no perfect way to handle every situation but the simplicity Jason lays out to feel, evaluate, transform and forgive is a message so many of us need to hear.

Here are some of my key concepts and quotes that I took away from Live to Forgive:


I would guess that we all have a person that we need to reach out to in an act of forgiveness. If you are thinking of someone do yourself a favor and order a copy today. The book will be generally available on January 15th at Amazon and other retailers but if you order here by December 20th you can get it by Christmas.
Humanity Life People