Do The Work That Gains You More Critics

July 20, 2017
I am convinced that the amount of success in the world is lower than we could have and the main thing that holds people back from achieving a higher level of success is that too many of us listen to the critics. If you start achieving good things, you will start to see some criticism directed at you, the more success the more the critics. Look at the recent NBA Finals, LeBron James and Stephen Curry battled for the championship and the majority of the conversation was from critics explaining why one or both wasn't as great as some say. Most seem to ignore the fact that both of them are in the top 20 basketball players of all time (I'm not going to argue where they are at, I think everyone can agree they are somewhere in the top 20).

If you have people that criticize you be happy, you are probably more successful than you think. The great tragedy is when people start believing their critics. They lower their goals, they put off their dreams, they quit before the breakthrough because they start accepting what their critics say. Have trusted friends and advisers that can confirm what is true and ignore the rest. You have great things ahead, don't stop now. 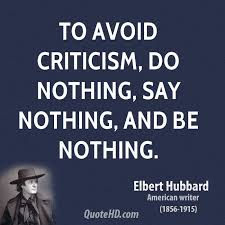