Why Do We Add Complexity To Prevent Mistakes?

January 28, 2020
I started listing to an interesting podcast call Cautionary Tales. I love listening to good stories where you have an opportunity to learn. One episode really got my attention talking about when the Academy Awards mixed up the winner and announced the wrong movie as Best Picture. It was all about how sometimes you put systems in place to catch an error but they actually cause the problem.

In talking about that mistake the speaker talked about Charles Perrow, an author who brought about a concept that explains how sometimes we try so hard to prevent a mistake that we end up causing it.

Every time we try to prevent a mistake, we put a process or system in place to catch or prevent the error. But for every process and system we put into place we make the whole endeavor more complex. Where you have more complexity you have more opportunities for failure. Perrow talked about how some systems are vulnerable to catastrophic failure to the point that it is all but inevitable for a failure to occur.

In complex systems you will deal with issues. In a tightly coupled system you won't have a lot of time to react to the problem as it quickly snowballs out of control.

The job ahead of us is figuring out how to make a system less complex and less tightly coupled. Finding fewer points of error and when those errors do happen giving ourselves time to do something about it before it becomes a disaster. 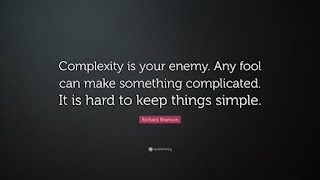 If you are interested to hear more I encourage you to look for Cautionary Tales in your favorite podcast app, just look for the episode titled, "La La Land: Galileo's Warning", or you can listen online here.